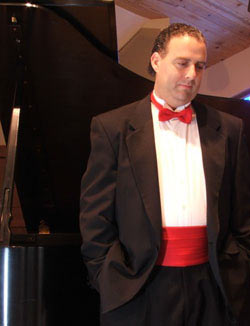 Marcos Daniel Flores was born in San Juan, Puerto Rico. He began his piano studies at the age of 16 with Rubén Malán and immediately entered the Bachelors Degree program in Music at the Conservatory of Music of Puerto Rico. There he studied piano performance with Luz N. Hutchinson (1990). Flores earned his Masters Degree in Piano Performance and Literature at the Eastman School of Music where he studied with Barry Snyder (1994), and later earned his Doctor of Musical Arts degree at Arizona State University where he studied piano solo performance with Caio Pagano (2004).

Dr. Flores has participated at the Eastern Music Festival in North Carolina as well as in many master classes by renowned artists such as Nikolai Petrov, Harold F. Lewin, Mattias Fletzberger, and Samuel Pérez. His private instruction includes piano lessons with Nina Svetlanova, Natalya Antonova, Carmen Or, Robert Weirich and Randall Hodgkinson.

Dr. Flores was the recipient of the Conservatory Piano Medal and the Arturo Somohano Leadership Medal among other awards, and he has performed recitals and concerts in both Puerto Rico and the United States.

Dr. Flores is currently the Organist/Pianist and Director of Worship Arts at Christ By The Sea United Methodist Church since October 2004. His ecumenical experience in church music includes conducting choirs, orchestras, and Christian-bands in several traditional and contemporary church denominations. Last year, Vero Beach Opera expanded its Scholarship Program to include piano scholarships for talented and committed young students with financial need to study under Dr. Marcos Daniel Flores. The scholarships are funded exclusively through the generosity of donors. For more information about making a tax deductible contribution, please call Vero Beach Opera at 772-569-6933.

“The impressionistic character of these pieces became an ideal territory for the pianist, who demonstrated his great affinity with them, and his dazzling technique…”