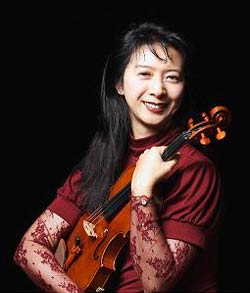 Mei Mei Luo is recognized as one of South Florida’s finest violinists. Until its closing, she was the assistant concertmaster of the Florida Philharmonic Orchestra, and served as concertmaster for the final concert in 2003.

As a soloist, she has performed the Tchaikovsky, Mendelssohn and Bruch violin concertos. She is concertmaster of Orchestra Miami and The South Florida Philharmonic Orchestra, and has been a regular member of the Palm Beach Chamber Music Festival since 2000. Miss Luo has played as a member of the Philadelphia Concerto Soloists as well as an alternate for the Philadelphia Orchestra.

Miss Luo earned her bachelor’s degree from the Shanghai and Shenyang conservatory of music. She was the second prize winner of the National Youth Violin Competition of China, and is a graduate of the master’s program at the University of Miami.

She has recorded Dvorak with the Delray String Quartet on the Poinciana label, and also appears on the Klavier and Harmonia Mundi labels.

This rendition of the Tchaikovsky appeared to have been thoroughly practiced, with Luo’s quasi-cadenza in the opening pages clearly and precisely played. Palm Beach Arts Paper – Greg Stepanich