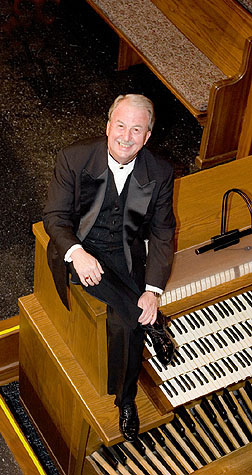 Richard Webb is Professor and Dean Emeritus of the College of Arts and Humanities at Southern University in Baton Rouge, Louisiana, having served previously as Dean of the College and Chief Academic Officer at Westminster Choir College in Princeton, New Jersey as well as Professor and Chair of the Departments of Music at San Francisco State University and East Tennessee State University. He holds the Bachelor of Fine Arts (Honors College) and Master of Fine Arts degrees from Ohio University, whose School of Music Society of Alumni and Friends honored him with its Achievement in Music Award, and the Doctor of Philosophy degree in Musicology from the College- Conservatory of Music of the University of Cincinnati. He studied organ with Wilbur Royer, Jerald Hamilton, Eugene Wickstrom and Gerre Hancock, organ literature with Roberta Gary and performance practice with Carol McClintock.

A well-known recitalist, teacher, clinician/adjudicator and administrator, Dr. Webb has performed solo concerts and appeared as guest artist with orchestras and ensembles throughout the United States, England and Spain. Major appearances have included the Inaugural Recital for the 50th Anniversary Season of the Central New Jersey AGO Chapter, a joint concert with the Echo Ringers of Japan by invitation of the Secretary-General of the United Nations to celebrate the 40th Anniversary of the Declaration of Human Rights and the Inaugural Series for the largest concert hall organ in North America at Davies Symphony Hall in San Francisco.

His imaginative programing interests have led him to premiere the works of such noted contemporary composers as Daniel Lentz, Lewis Songer, Meyer Kupfermann, John Haussermann, Jan Hanus, Gertrude Martin Rohrer, Robert Copeland, Alvin Batiste, James Hanna, Dennis Johnson, Dinos Constantinides, William Grimes and Charles Lloyd. He has presented thematic recitals and workshops on the organ music of America, Asia, Russia and Spain (including a New York recital for the Quincentenary of Christopher Columbus at Saint Thomas Church Fifth Avenue), the organ and piano music of Sigfrid Karg-Elert and the organ and choral works of Siegfried Reda. His informative and entertaining workshops and practical master classes in various performance practices have been particularly well received as a complement to his concert appearances. Recognized as a facile and highly sensitive accompanist on all keyboard instruments, he is in significant demand as a collaborative partner for singers and instrumentalists.

Dr. Webb concertizes as a member of the Louisiana Touring Directory and is represented as a collaborative artist and chamber musician by Bach’s Five Productions. Recognized among specialists in the music of Sigfrid Karg-Elert, he is a Life Member of the International Karg-Elert Archive in the United Kingdom.

‘This was a most enterprising all-Karg-Elert programme on the 151-rank Aeolian-Skinner organ at the Cathedral of St. John the Divine in New York City, recently restored by Quimby Pipe Organs, Inc. In Dick Webb’s skilled hands, this historic instrument demonstrated ideally the wide variety of styles comprising Karg-Elert’s compositions, while avoiding the obvious. A most appreciative audience heard some important later works, such as Legend, Voices of the Night and Preambulo from Music for Organ..’
Anthony Caldicott,
Karg-Elert Newsletter
International Newsletter of the Karg-Elert Archive
Issue 75 – January, 2014

‘In a balanced, well-constructed program, Dr. Webb delighted the audience with technically brilliant, musically satisfying performances of a wide variety of organ works. A clear aesthetic vision and confident command of both technical and musical demands were evident throughout. His program was a clear indication of his stature both as an artist and educator. The recital he offered was beautifully performed and both the instrument and the audience were very well served by this significant American organist.’
Roy Stewart,
Piccolo Spoleto Festival
L’Organo Website

‘The performance of the music of Karg-Elert by Dr. Richard Webb was inspirational. The lecture was excellent and the master class one of the best I have seen.’
Rollins College/Central Florida AGO Chapter Romantic Organ Music Conference

‘…elevated the marriage of organ and brass to high art.’
San Francisco Chronicle

‘Master organist Richard Webb ran the gamut, musically speaking, from the Baroque to the present day. The fact that he is a noted and devoted educator comes through clearly in his programing … featuring high-quality performances vastly different from each other in style and scope.’
The Pacific Grove Monarch

‘His programs are a treat for people who wish to hear the gamut of the organ’s effects. More important, however, is his ability to interpret so correctly and compellingly the organ literature from many periods of musical history. Webb’s love of music and of performance clearly impress the listener.’
Kingsport Times-News