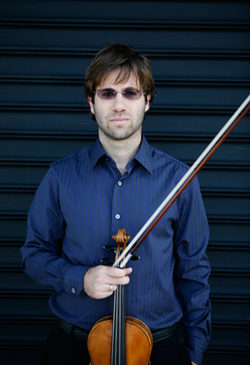 Violinist Tomas Cotik is internationally recognized as a chamber musician, soloist, orchestra musician and teacher, Tomas Cotik was hailed by Michael Tilson Thomas as “an excellent violinist”. The Palm Beach Arts Paper praised his “laudable level of technical accuracy” as well as his “tenderness and warmth”, further describing him as “a musician who prepares thoroughly and has great respect for the music he performs.”

Mr. Cotik is currently involved in six commercial CD recordings including Mendelssohn viola Quintets with James Dunham produced by Blanton Alspaugh and engineered by John Newton for Sono Luminus and the world premiere and recording for Naxos of Kenneth Fuchs’s String Quartet N.5 produced by Judith Sherman. Other upcoming CD releases include recordings as a member of the Delray String Quartet, a CD with music for violin and piano by Franz Schubert for Centaur Records and a disc with music by Astor Piazzolla. Tomas is a teaching assistant at University of Miami’s Frost School of Music, where he is currently writing his doctoral dissertation about the interpretation of Schubert’s violin and piano music.He has appeared recently as a soloist in Amarillo, Miami and Toronto performing Tchaikovsky & Bruch Violin Concertos, Schubert Rondo for violin and strings and Vivaldi’s Four Seasons. After an international audition in New York Mr. Cotik was invited to perform as concertmaster of Minas Gerais Philarmonic in Brazil under Fabio Mechetti. He also was runner up for the concertmaster position at the Philharmonic Orchestra of the Colon Theater in Buenos Aires and finalist for the Orlando Philharmonic concertmaster position. In Florida he has performed as principal second violinist of the Florida Grand Opera and is in his third season as a member of the Delray String Quartet.

From two 2007 to 2009 Tomas Cotik was the first violinist of the Harrington String Quartet, Concertmaster of the Amarillo Symphony and was on the faculty at West Texas A&MUniversity. Farther chamber music collaborations include members from the Cleveland, Miami, Pro Arte and Vogler String Quartets among others. He has played recitals in Germany,Holland, Canada, USA, Argentina Japan and throughout the U.S. participating in more than 15 international music festivals. A former member and rotating concertmaster of the New World Symphony, Tomas Cotik holds a Bachelor and Master in Music from the Freiburg University of Music in Germany and an Artist Diploma from the Glenn Gould School in Toronto. He studied with Nicolas Chumachenco and Lorand Fenyves. He also worked under the guidance of the Vermeer, Tokyo and Endellion String Quartets, as well as notable artists, including Midori, Christian Tetzlaff, Ana Chumachenko Heinz Holliger, Leon Fleisher and the leaders of Vienna, Berlin, New York, Philadelphia, Boston, Cleveland and San Francisco Symphony. He has performed with several internationally prominent conductors such as Michael Tilson Thomas, Valery Gergiev, Roberto Abbado, Yakov Kreizberg, Marin Alsop, Stephan Deneve, Roger Norringtonand Robert Spano at important venues including Carnegie Hall.

Tomas is a first prize winner at the National Broadcast Music Competition in his nativeArgentina in 1997 and the Government of Canada Award for 2003-2005.

The Delray String Quartet opened its seventh season Friday in Fort Lauderdale with a new second violinist and a much tighter, richer ensemble sound.

The second violin chair had been a center of instability for the quartet, just as the group was expanding from its Delray Beach base to Broward and Miami-Dade counties. Longtime member Lazslo Pap resigned early this year. He was replaced last season by Megan McClendon, who has now been replaced by the young Argentine violinist Tomas Cotik.

Cotik, a former member of the New World Symphony and a teaching assistant and doctoral student at the University of Miami’s Frost School of Music, made his debut with the quartet at Friday’s concert at All Saints Episcopal Church. While it’s unclear whether Cotik’s presence was the reason, the quartet—always one of the brighter stars on the local music scene—played with greater authority, cohesiveness and consistency than in the past.

Haydn’s Quartet in C major, Op. 33, No. 3, The Bird came off with remarkably clean but never overly polite playing. The minor-key section in the first movement was pensive and brooding. The Scherzo had just the right touch of humor, and the Adagio inspired the quartet to darkly dramatic playing, with intense performances by first violinist Mei Mei Luo and cellist Claudio Jaffé. The last movement brought more crisp playing, with just enough bite.

The American composer Kenneth Fuchs, currently professor of composition at the University of Connecticut, attended the concert to introduce his String Quartet No. 4. Fuchs, a South Florida native who studied at Juilliard with David Diamond, Milton Babbitt and Vincent Persichetti, composed the work in 1998 on a commission from the University of Miami’s Frost School of Music for its resident Bergonzi String Quartet.

“As a composer I want my music to be very direct and accessible,” he told the audience before the performance. “I don’t want it to be overtly pretty, but I think communication is very important.”

The one-movement, 11-minute work had an energetic, optimistic American sound, with open harmonies reminiscent of Aaron Copland and melodies that were soaring and lyrical without being cloying. It opened with repeated, minimalist figures in the viola, gained in force as the other instruments came in and used harmonics in the violins to achieve ghostly, wispy effects. After building to an impassioned, melodic climax, the pace picked up quickly and the work surged toward a swift and abrupt but effective ending.

The concert concluded with the Brahms Quartet in A Minor, Op. 51, No. 2. If the performance lacked the relaxed Viennese feeling that much of the music seemed to call for—as in the second theme of the first movement—it was an intensely focused and tonally rich account. The quartet achieved an almost symphonic depth of tone in the agitated, tremolo section of the second movement. The last movement came off with ferocious bite, but with a measured pace that allowed the drama to come through.

As an encore, in honor of the new violinist’s roots in Argentina, the quartet played a transcription of Melody by Astor Piazzolla, a smoky, romantic few minutes played with warm sensuality.

The Delray String Quartet has been adding luster to the South Florida music scene now for seven seasons. Second violinist Tomas Cotik, new to the group this season, has quickly become integrated into the ensemble, which has developed a following across three counties.

The Delray Quartet opened the new year Sunday afternoon at its home base at the Colony Hotel in Delray Beach with a program featuring three composers.

The concert led off with Beethoven’s Quartet in B-flat, Op. 18, No. 6. The last of his published early quartets, the work is less knotty than his late works in the genre, with a clear structure, easily discernible melodies, and a style that descends directly from Haydn and Mozart.

Beethoven’s quartet was given a strong, vigorous performance, underlined by a live and unforgiving acoustic that magnified a few scrapes and blemishes. The music was largely well served, particularly La Malinconia, the Adagio opening to the last movement. Although the tragic mood is quickly dispersed in favor of a faster tempo and cheerier mood, Beethoven’s written request that the opening “be played with the utmost delicacy” was affectingly observed by the Delray musicians. With the doors to the room in the lobby left open, passing trucks lent their own percussive coloration to the listening experience.

At about 12 minutes, Shostakovich’s String Quartet No. 7 in F minor is the shortest of his essays in the form. Written in 1960 in memory of his first wife, it shows the composer withdrawing into himself and embracing an even more introspective style. Each instrument is afforded solo possibilities, often playing alone, unaccompanied and unadorned. The piece eventually erupts into an angry and ferocious fugue, which confirmed in glorious fashion the skills of each Delray member, with the players ripping into the music with savage abandon. The final retreat into quiet resignation was sensitively accomplished.

Anton Arensky was a student of Rimsky-Korsakov, but found himself influenced to a greater degree by his friend, Tchaikovsky. Arensky’s String Quartet No. 2, Op. 35a, was originally written for violin, viola, and two cellos, and revised for standard string quartet forces, the version that was performed Sunday.

In the first movement, Arensky drew his theme from the Greek Orthodox liturgy, and the last movement uses the famous Slava theme also employed by Beethoven in the second of his Rasoumovsky Quartets, and by Mussorgsky in his opera Boris Godunov.

The middle movement, a set of variations on a Tchaikovsky theme, became Arensky’s best known work in his later arrangement for string orchestra. Few would be able to identify Tchaikovsky’s theme, however, since it is taken from one of his most obscure works, the song Legend–The Christ Child Had a Garden from his Sixteen Songs for Children.

The heavy borrowings apart, the music made for a stirring experience in the hands of the Delray musicians, with the rich instrumental tones of violist Richard Fleischman and cellist Claudio Jaffe particularly sumptuous.